Creative Arts Therapists in Ireland 2020: A Survey of Key Findings

This survey is a comprehensive mapping of Creative Arts Therapists (CATs) in Ireland. It presents the current distribution and demographic profile of therapists and highlights practice, professional engagement and employment characteristics and trends. The survey was completed in November – December 2019 and is published in Polyphony: Journal of the Irish Association of Creative Arts Therapists (IACAT).

88 were professional IACAT members and 8 were not. 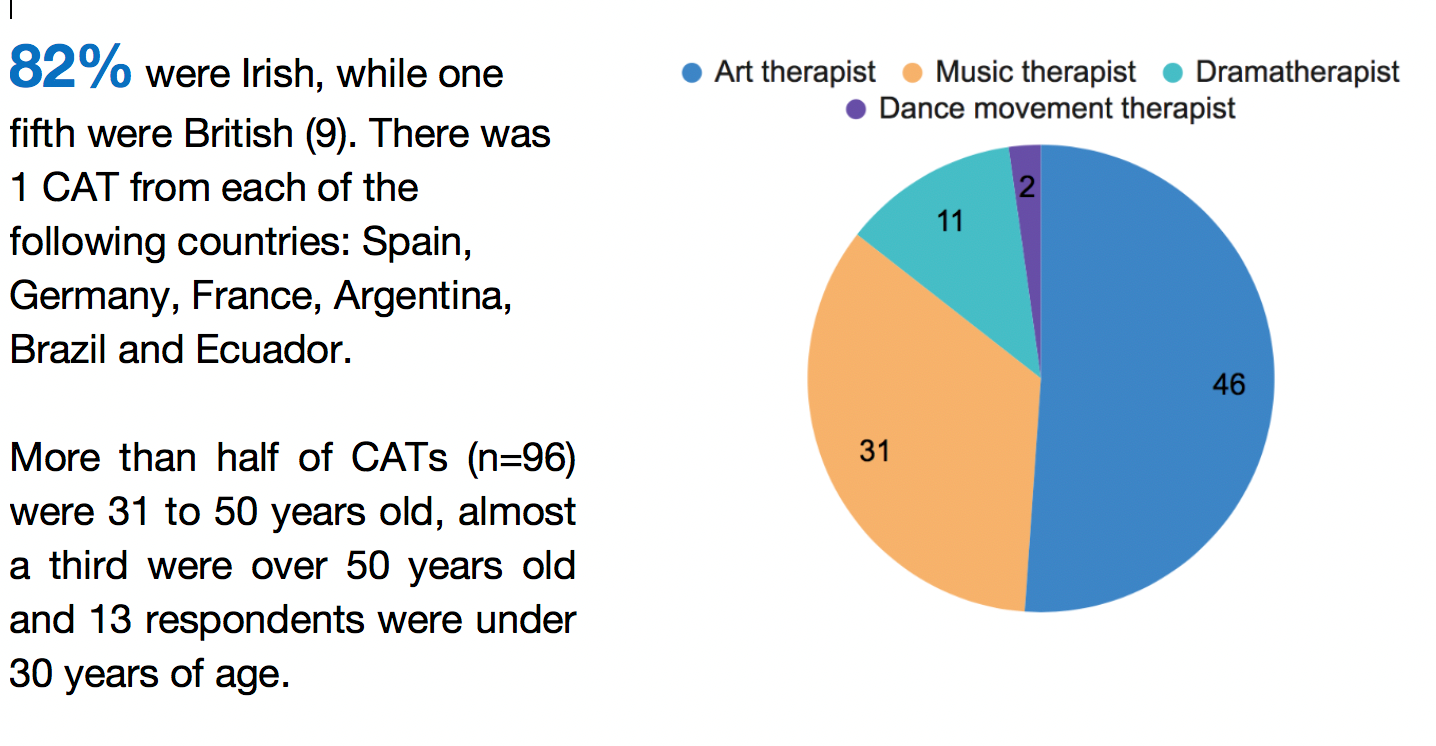 1/4 of CATs were based in Dublin, one fifth in Cork, 8 in Clare and 7 in Kildare. These were closely followed by the urban areas of Limerick, Galway and Waterford.

3/4 of respondents trained in Ireland, over one fifth (21/96) in the United Kingdom, 4 in Europe and 1 in both South America and Australia.

9% of all respondents had been practicing for less than one year.

57% of CATs engaged in further training since qualifying. Almost one-quarter of those who did, completed psychotherapy training (13/55). Some CATs also believed that increased training in verbal therapy skills would benefit graduates.

‘Humanistic’ or client-centered was the most frequently selected approach, by almost three-quarters of respondents. Integrative approaches were highlighted in this survey and 60% choose more than one orientation/approach.

15% of CATs were a member of an Irish union. 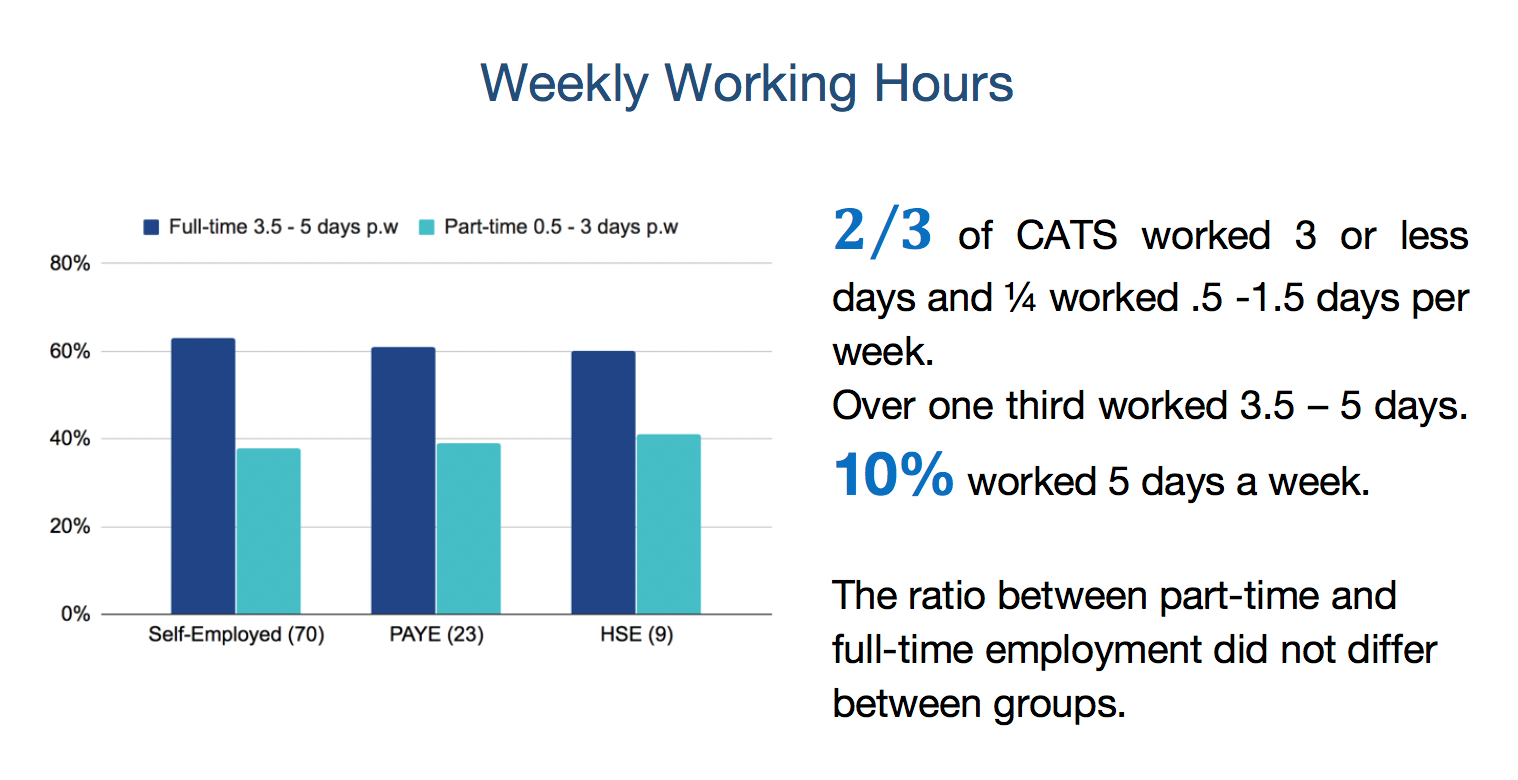 Music therapists tended to work more days per week on average (mean 3.3, median 3.5) and ‘working 5 days’ was the most frequently selected option in this group. 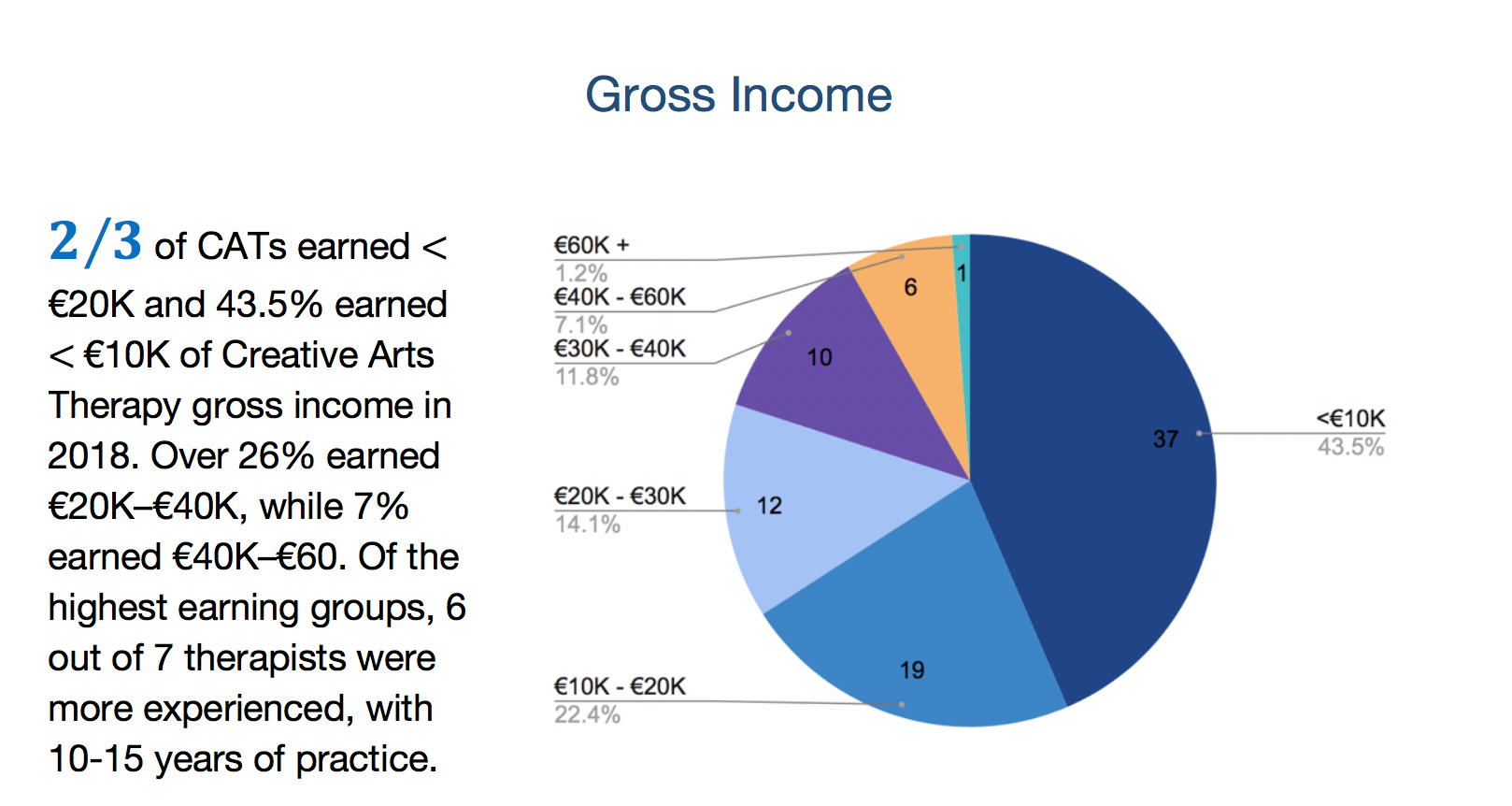 Music therapy was the profession that the highest proportion (30%) of practitioners earning over €30K, compared with just 10% of art therapists earning above €30K.

For over half of all survey respondents (52%, 49/96), more than 50% of their annual income came from non-CAT employment. Education including lecturing, research and teaching an art form was the most common. This was followed by work as an artist or performer, community arts, and psychotherapy and counselling. 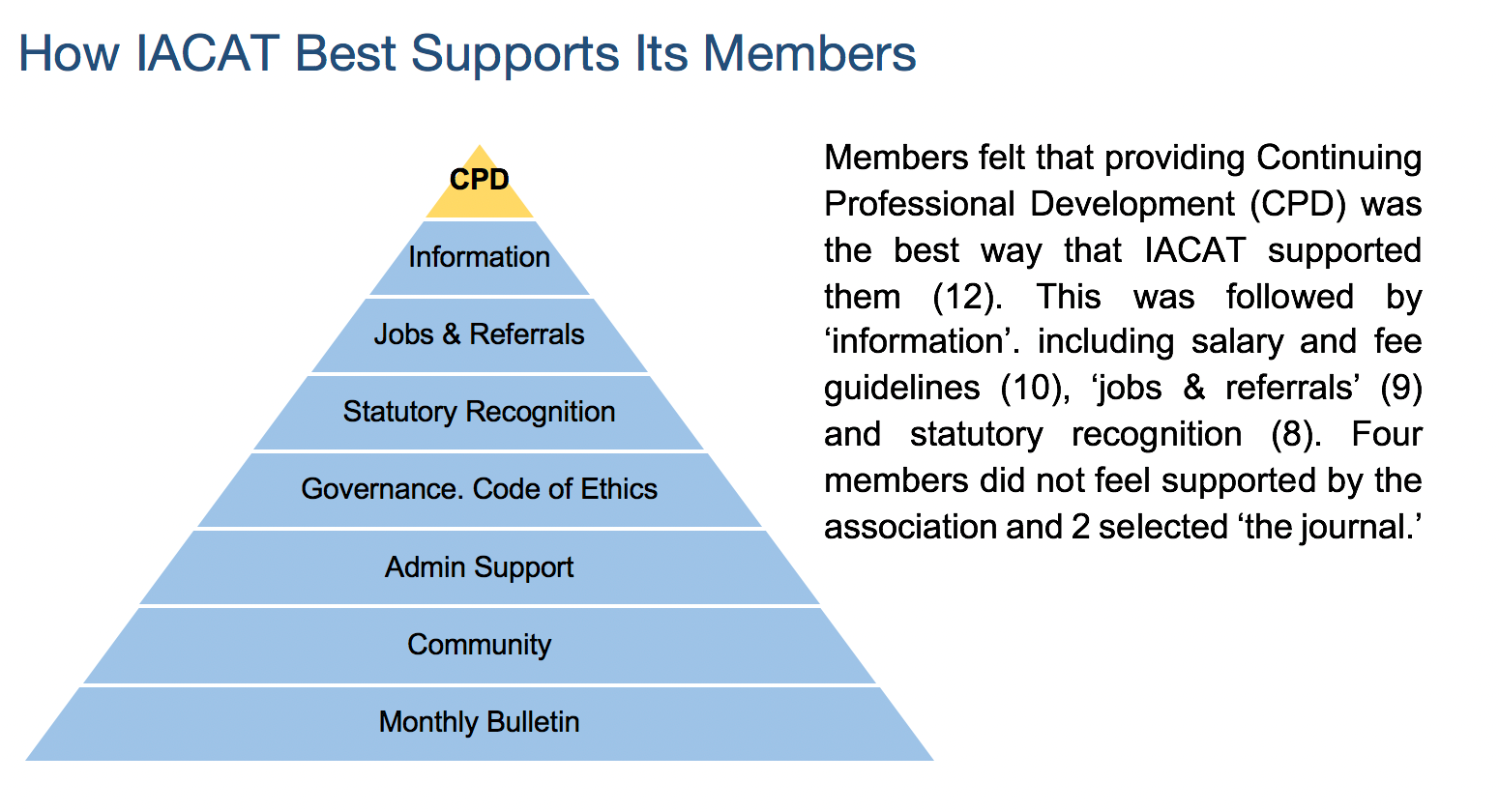 How Can IACAT Better Support Its Members

How Can The Profile of Creative Arts Therapies Be Raised

The best ways identified for increasing awareness of Creative Arts Therapies were media engagement and public relations, lobbying for statutory recognition, increased research, educating professionals and services on creative arts therapies and defining them in relation to arts in health practice, and promoting greater levels of professional accountability.

97% of CATs engage in clinical supervision.

Over half attend 6-12 times per annum, with half of these attending monthly. Another third attended 12-24 times per year, while 11 attend fortnightly and 5 weekly.

4/5 of CATs funded their own supervision; for one fifth it was employer-funded.

57% had a supervisor with the same modality they did, while 43% had supervisors with different modalities or professions, including: psychotherapists, occupational therapist, psychologist, social worker, guided imagery in music practitioner, and play therapist.

51% of the respondents engage in peer supervision.

Over 1/5 (22%) of the respondents are clinical supervisors. 3/4 have a supervision qualification. Almost half of all supervisors offered individual supervision and a quarter offered group supervision. More than one third (35%) supervise students on clinical placement from Master’s training courses.

Over 3/4 of respondents engaged in self-employed work.

43% of the self-employed therapists described the majority of their work as private practice. This was followed by institutional work (22) and community-based work (11). Over 60% (45/74) worked 15 hours, while 10% worked 25+ hours per week.

Almost 3/4 of self-employed CATs included non-contact time in their rates.

Just under half (36/74) of self-employed CATs have their own private space, where they receive clients, and 92% of these reported that their therapy space was adequate.

Almost 1/5 of respondents reported that they work in the client’s homes. 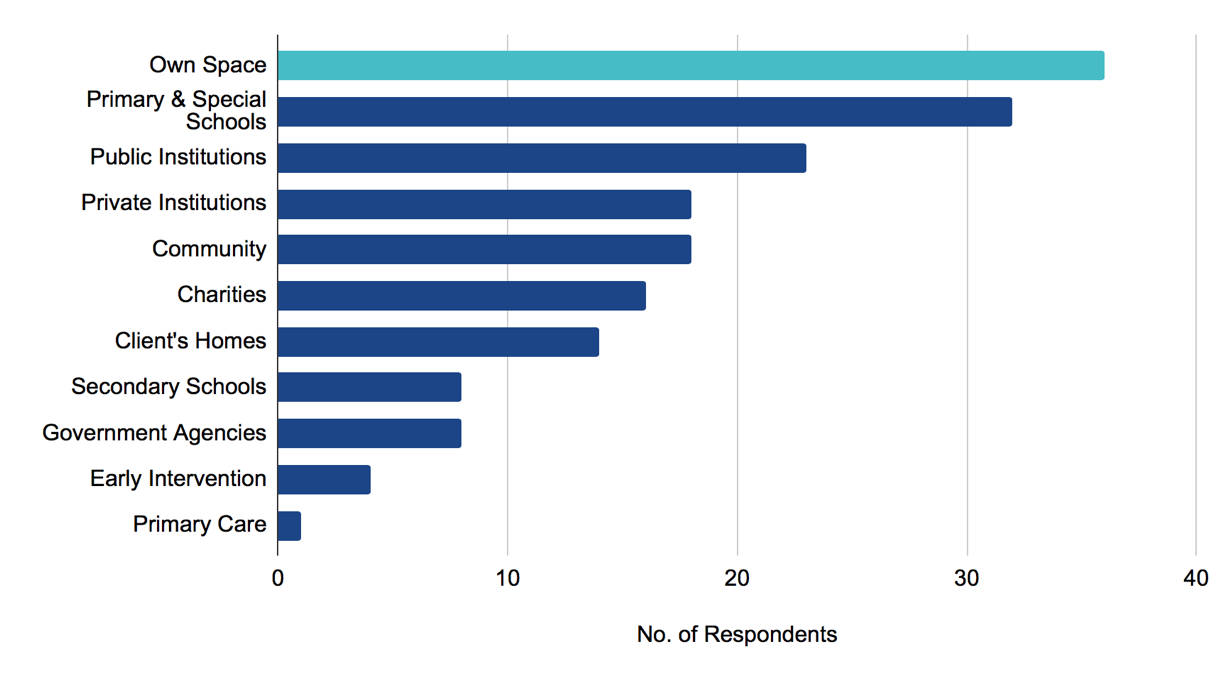 Self-employed therapists worked with a broad range of populations. Mental health and additional needs (children, adolescents and adults) were the most selected clinical areas, along with early intervention. This was followed by work with older adults. Three therapists indicated that they work with the homeless and in the prison service and 2 therapists work in children’s palliative care. 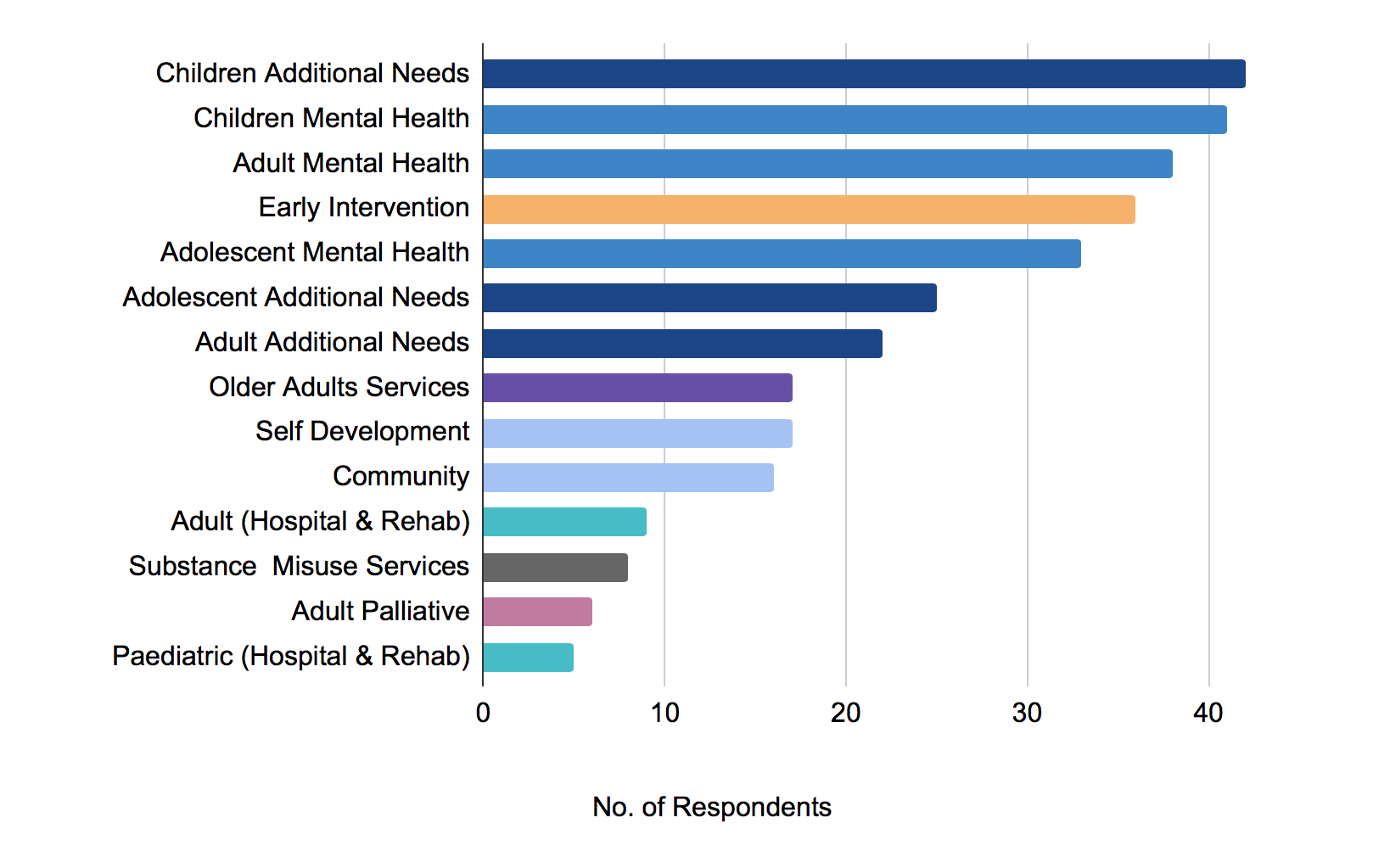 The median fees charged by self-employed therapists for individual sessions in this survey did not differ from the those in the last survey (IACAT, 2014). There were some increases for group sessions (6%) and other services. The percentage change in the consumer price index from the period December 2013 to April 2020 was 2.2% (CSO, 2020), however, some therapists may have decreased their fees during the years of the recession and may have only recently regained pre-existing rates.

Some therapists were concerned about practitioners under-charging for services:

It has concerned me recently seeing the rates of pay offered by certain services - €40 per hour in one case regardless of group/individual and somehow expecting all the additional paperwork etc to be completed in private unpaid time. I think it is important to acknowledge the costs of running a practice, and how cutting corners can lead to lack of quality in provision of therapy, as well as burn out in therapists.

Over 1/2 of self-employed respondents earned less than €10K from self-employed income in 2018 and many supplemented their income with non-CAT work. Forty percent earned between €10K - €30K, while just 8% earned more than €30K.

More than 1/2 of the contracted therapists(n=33) were members of multidisciplinary teams and engaged in joint working with other professionals. 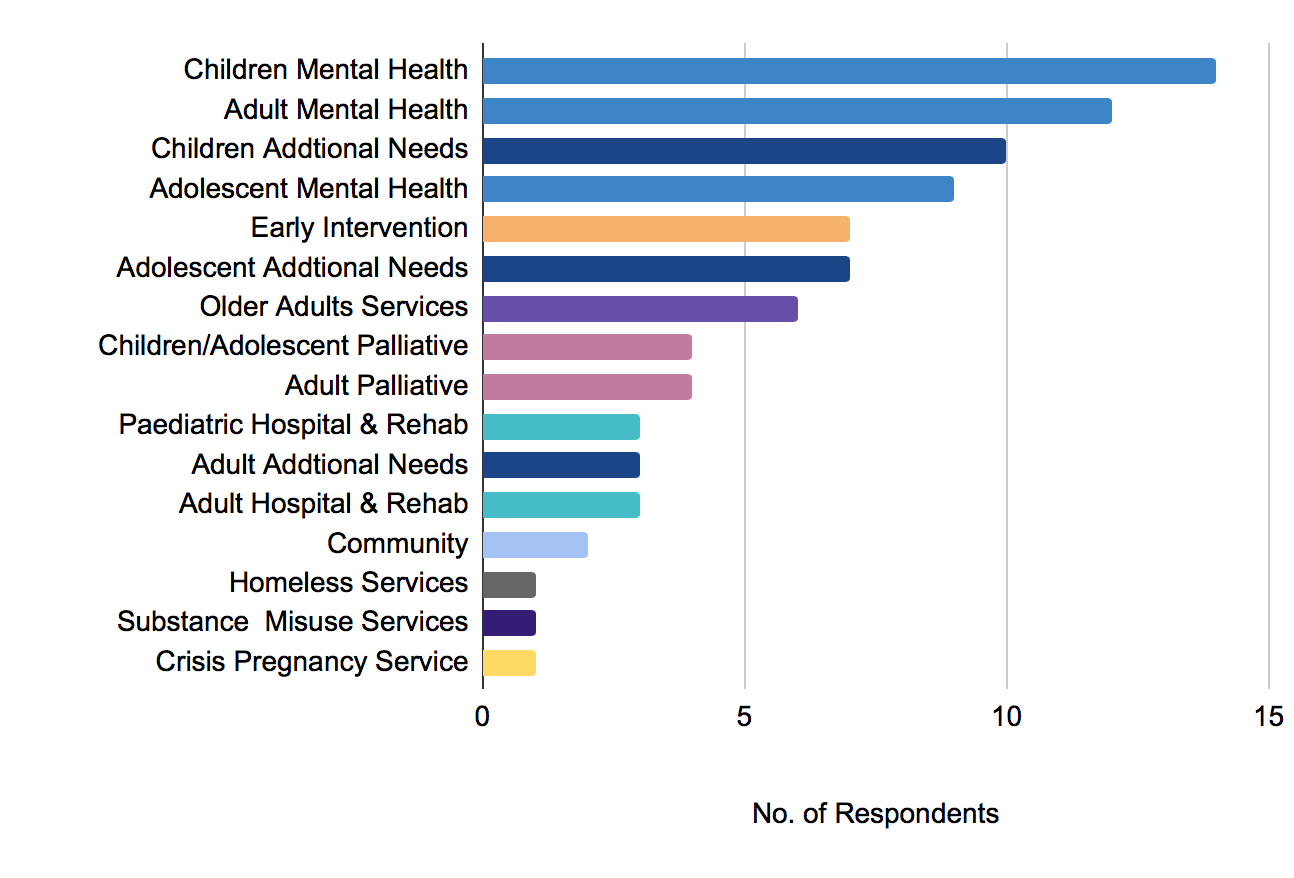 Just over 1/2 of the contracted therapists had a permanent contract. Duration of contracts ranged from 1-12 years with a mean of 4.6 and a median of 3.5 years, indicating that half of these permanent posts were set up in the last 3.5 years.

2/5 reported an increase in their hours since commencing in their contracted role.

CATs were most frequently line-managed by nursing (7), followed by occupational therapy (3), psychology (3), and school principals (3).

5 was the overall average number of daily individual/group sessions.

51% had more referrals than the sessions they can offer in their contracted hours.

Contracted therapists reported a range of salary scales. The most commonly reported was a charity pay scale (6/33). Although two therapists in the health service (Section 38 agencies) were remunerated at the HSE senior therapy scale, no directly employed HSE CATs were paid on this scale. 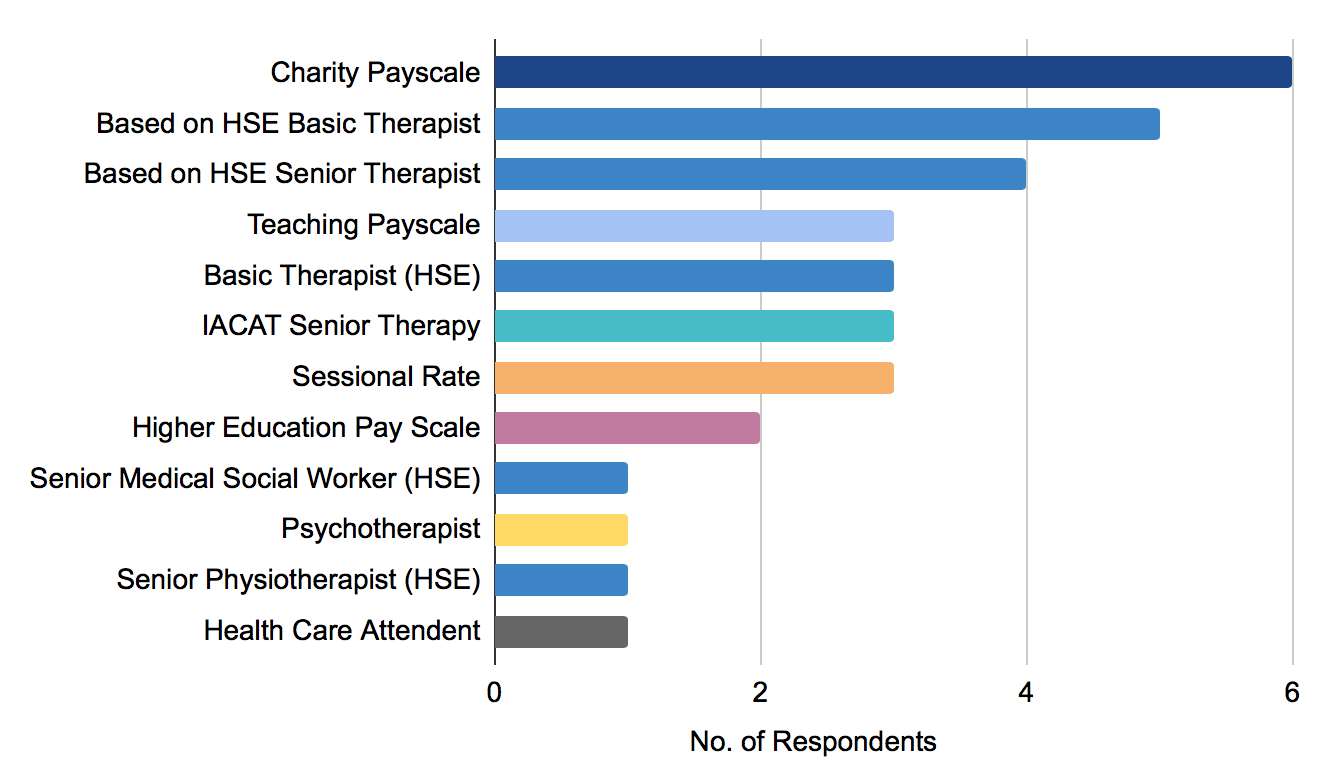 When 2018 gross income from self-employed CAT work and contracted CAT work were compared, it showed that contracted work tended to result in higher income. 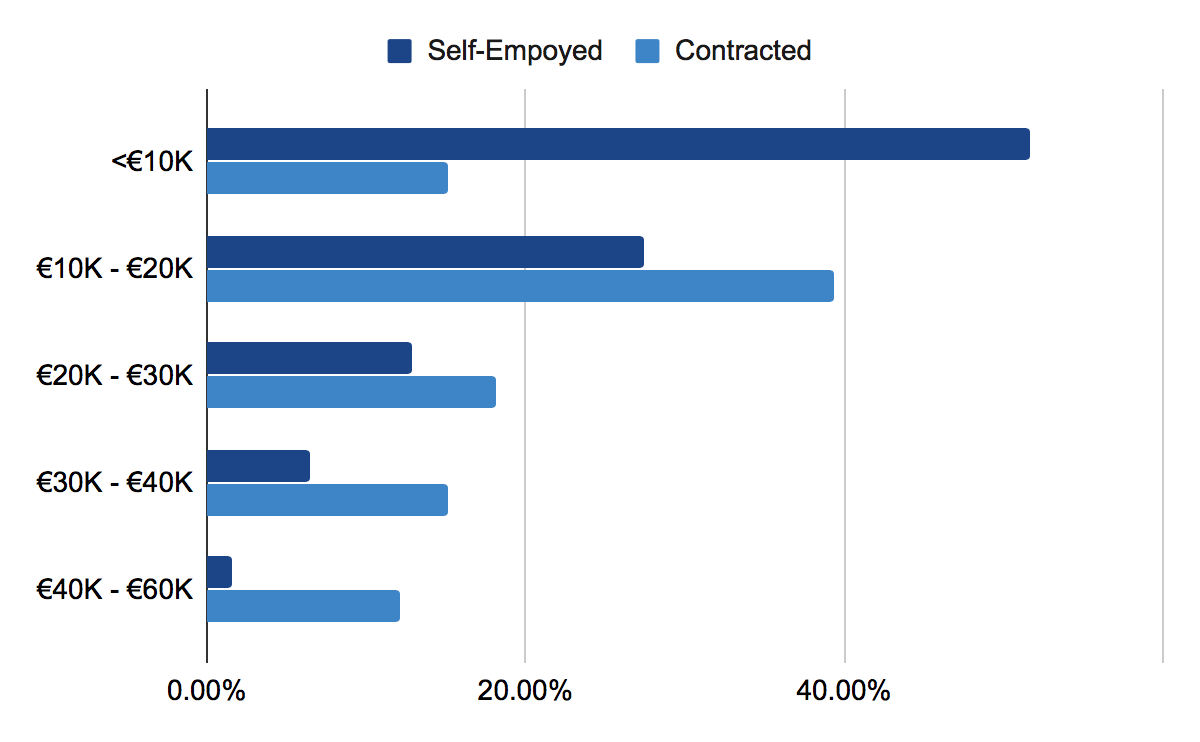 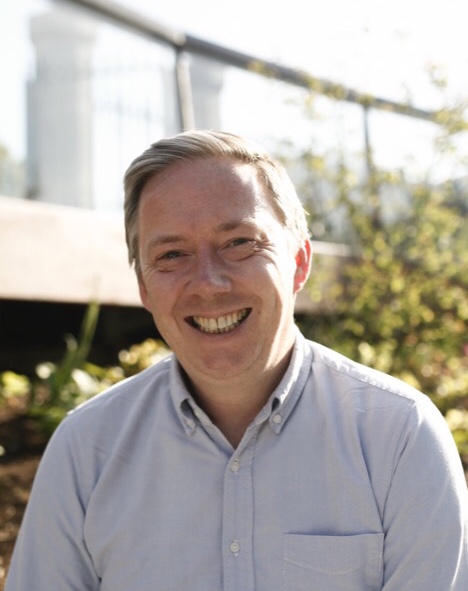 Bill Ahessy is a music therapist and clinical supervisor based in Dublin. He works with older adults and children with visual impairment and additional needs. Bill trained as a music therapist in Australia and in Spain and has since completed a diploma in person-centred dementia care and in clinical supervision. He has guest lectured at the University of Limerick, Trinity College Dublin and Dublin Business School and supervises music therapy trainees and practicing music therapists.  Bill has published peer-reviewed articles on his work, contributed to two books and has continuing research interests in creative arts therapies, choir interventions in music therapy and music therapy with people with dementia.